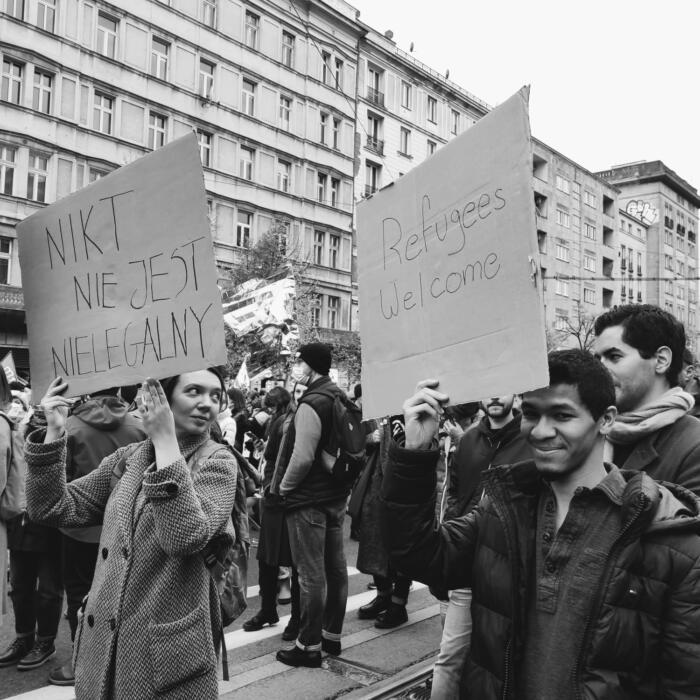 SOLIDARITY WITH REFUGEES – JOIN US

Many students have already found out that the Polish Language School KLUB DIALOGU is an extraordinary place where they do extraordinary things! SOLIDARITY WITH REFUGEES is a new project in which school employees got involved. Its purpose is to resist the mistreatment of refugees and to help to the best of our ability. We, the employees of KLUB DIALOGU, which is not only an educational institution, a school of Polish as a foreign language, but also a place for meetings, conversations, and exchange of experiences between people from different continents and cultures, cannot accept breaking the law, international conventions, and situations where refugees’ medical, material or asylum applications are refused. We also cannot accept hate speech and violence against people of other nationalities.

The actions we have taken so far include: participation in the ‘Stop Torture on the Border’ protest march and undertaking the project of writing and reading letters of support from foreigners who, for various reasons, found themselves in Poland and have a different status of stay in our country (read further here >>).

But that’s not all! In December, we plan to organise a ‘Collection of necessities’ (cleaning products, clothes, food), which will be donated to appropriate foundations to help. With our help, we also want to support one refugee to whom KLUB DIALOGU will provide a scholarship to learn Polish as part of the ‘Solidarity in Education’ program.

If you would like to join us – don’t hesitate! Any help is appreciated. You can bring items to the fundraiser, help with packing, or make a donation to the scholarship. Maybe together we can help more than one person in linguistic and cultural assimilation! Vouchers can be purchased at the school office or by making a bank transfer with the title Solidarity in Education’.

MARCH OF SOLIDARITY WITH REFUGEES

We could not miss the Sunday (17.10) march – protest: Stop torture at the border! A march of solidarity with refugees, which started at 2pm from the Charles de Gaulle roundabout, commonly known as the palm tree roundabout. It isn’t a coincidence that this was the place chosen by the organisers of the march. This exotic tree standing on the ‘Royal Route’ (Trakt Królewski) came about in December 2002 as an artistic project by Joanna Rajkowska, who wanted to commemorate the Jewish population, once inhabiting much of Warsaw, and from whom the name of Aleje Jerozolimskie Street (Jerusalem Avenues) was derived. The palm was also, according to the artist, a symbol of openness towards others.

We, employees of KLUB DIALOGU, which is not only an educational institution, the Polish language school for foreigners, but also a place for meetings, conversations, and exchange of experiences between people from different continents and cultures, cannot accept violations of the law and international conventions and situations where medical aid for refugees is refused, risking their health and even death.

Walking along the streets of Warsaw (ROUTE: Rondo de Gaulle’a, Plac Trzech Krzyży, Sejm, Plac Konstytucji, Metro Centrum), in a walk lasting over two hours, we wanted to show that we are in solidarity with the fate of people suffering at the borders and we believe that you should always protest when someone is hurt, or deprived of a chance for a normal life just because they were born in a country affected by war or other humanitarian crisis.

We also want to thank OUR STUDENTS who were with us at the protest. Thanks to them, we can learn tolerance and openness. Thank you for the lessons you teach us and for being there! When matters are important to us, let’s be together!